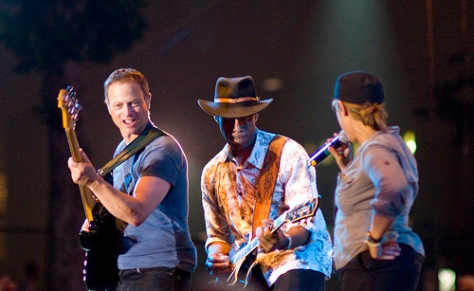 Given May is National Military Appreciation Month I thought this week would be the perfect time to talk about the most moving and patriotic film I’ve seen this year.

While attending the 2011 Sedona International Film Festival I had the great pleasure of viewing several excellent films but none more inspiring or deeply affecting as director Jonathan Flora’s Lt. Dan Band: For the Common Good.

At first blush Flora’s documentary is a simple, nicely structured chronicle of muti-talented actor/ musician Gary Sinise and his gifted band mates on their seemingly never-ending USO tour but, as the film unfolds, it quickly becomes clear this movie is about something much more than just Sinise’s band on the run.

At it’s heart, Lt. Dan Band: For the Common Good is about America and our relationship with the brave men and women of our armed forces. It is, in many ways, a celebration and tribute to the best of our best and, to the filmmaker’s great credit, it’s all presented in a completely non-partisan way, honestly and free of bravado or jingoism.

Flora’s documentary provides a rare glimpse at the inner workings of Sinise’s heart-felt commitment to our troops as we follow the actor/ musician and his band to several military bases around the world. The behind-the- scenes look at how a USO tour is put together is as enlightening as it is fun and, with interviews of the soldiers and military personnel interspersed, Flora does an excellent job of showing us the “how” without ever losing sight of the “why”.

Oh, and did I happen to mention- thank’s to Gary and his accomplished collection of musicians- the movie also happens to ROCK?! Seriously, at times, this is one helluva concert flick and really has me hoping I’ll get a chance to see Sinise and his band live at some point. Should the opportunity ever present itself, I can assure you I will!

At a time when it seems there’s a new super hero flick invading our multiplexes every other weekend, Lt. Dan Band: For the Common Good shines a welcome spotlight on the true heroes of our very real and often dangerous world. They don’t come from the planet Krypton or Gotham City, but rather Illinois, Ohio, Texas and Arizona. They are our sons and daughters, brothers and sisters, cousins and neighbors and they deserve to be remembered and celebrated more often than simply on our designated national holidays.

It should be noted both the director Jonathan Flora and Gary Sinise were awarded the Sedona International Film Festival’s Humanitarian Film Award for Lt. Dan Band: For the Common Good. From the audience reaction at the screening I attended, it was an easy and much deserved win for the filmmakers.

So, when do you all get to see it? Well, the big news is, this flick will be available to watch in the comfort and privacy of your own homes beginning on July 4th! By logging onto LtDanBandMovie.com you’ll be able to stream the movie and one of out of every four dollars will be donated to organizations that support the military and their families such as the USO, Snowball Express, Operation International Children and more. For more information and all the latest news be sure to visit LtDanBandMovie.com!

A Few Minutes with Danny Huston

Danny Huston, star of the new film THE WARRIOR’S WAY is one of those character actors you’ve seen hundreds of times but you still might not be connecting the name with the face.

In 2010 he appeared in Ridley Scott’s ROBIN HOOD as King Arthur, costarred with Al Pacino in HBO’s critically acclaimed YOU DON’T KNOW JACK and ruled the sea as Poseidon in the summer blockbuster CLASH OF THE TITANS. Danny, like his father, began his film career as a director with the 1988 film MR. NORTH. His first film as an actor came a few years later with a minor role in the film LEAVING LAS VEGAS. Horror fans will remember him as Marlowe, the leader of the vampire invasion, in 30 DAYS OF NIGHT (the only good thing about that movie if you ask me) and comic book fanboys (and girls) will recognize Huston from his recent performance as Stryker in X-MEN ORIGINS: WOLVERINE. Huston’s varied and exceptionally busy career spans nearly two decades with some of his most memorable work featured in 21 GRAMS, THE AVIATOR, MARIE ANTOINETTE, CHILDREN OF MEN, THE KINGDOM and, my personal favorites, Nick Cave’s THE PROPOSITION and HBO’s award winning miniseries JOHN ADAMS.

Danny Huston is the third generation of a highly celebrated Hollywood dynasty. His father is legendary film maker and actor John Huston, director of such classics as THE MALTESE FALCON, THE AFRICAN QUEEN, THE TREASURE OF THE SIERRA MADRE, KEY LARGO, THE ASPHALT JUNGLE, THE MISFITS, THE MAN WHO WOULD BE KING, UNDER THE VOLCANO, PRIZZI’S HONOR and THE DEAD. A list of his most memorable work as an actor includes CASINO ROYALE (1966), THE LIFE AND TIMES OF JUDGE ROY BEAN, BATTLE FOR THE PLANET OF THE APES and CHINATOWN. Danny’s grandfather is, of course, famous movie and stage actor Walter Huston, star of THE DEVIL AND DANEIL WEBSTER, YANKEE DOODLE DANDY, DODSWORTH and THE TREASURE OF THE SIERRA MADRE. His sister, Angelica Huston, is the award winning actress best known for her roles in THE POSTMAN ALWAYS RINGS TWICE, THIS IS SPINAL TAP, PRIZZI’S HONOR, LONESOME DOVE, CRIMES AND MISDEMEANORS, THE ADDAMS FAMILY, THE GRIFTERS and THE ROYAL TANNENBAUMS. The Huston clan have been nominated for seventeen Academy Awards and have taken the Oscar home on four separate occasions.

I recently had a chance to talk with Danny about his new film The Warrior’s Way.

Pop Bitez: Danny, how are you doing today?

PB: So, first, I have to ask, outside of your recent work in ROBIN HOOD and YOU DON’T KNOW JACK, you seem to be making a career out of playing the guys we love to hate, what’s up with that?

DH: (laughing) I don’t know, I’ll have to ask you that question! Villains are wonderful characters, I really like to get a scalpel out and prod around and see where they feel. Of course, they don’t consider themselves villains necessarily, but they’re just a lot of fun to play.

PB: What first attracted you to THE WARRIOR’S WAY?

DH: It had this nostalgic effect on me…when I first read the screenplay, it was like a Sergio Leone movie…I could hear the Morricone soundtrack and it had this SEVENTH SAMURAI/MAGNIFICENT SEVEN quality to it. It was this kaleidoscope of potential imagery and this delicious evil character that kind of belonged to the evil characters I was afraid of when I was a young boy. It also has this great Clint Eastwood hero and a heroine who’s obsessed with getting her revenge back on me and my love for her. I sort of see her as a desert flower; it was just this great rich material.

PB: I’m curious to know what your process is like when you’re preparing for a role like The Colonel.

DH: Well, a lot of it happened with wardrobe, I wear this mask in the film which was very influential in how I planned the character. It’s very tight to my face and it only allows half of my face to perform. It forced my head to move in certain directions and it created a strange man from an exterior point of view and then, as far as his interior, he’s compulsive, he’s romantic, he’s vain, he’s phobic, he’s very concerned about germs, yet he’s caught up in this dust bowl of a world, so he’s got these interesting complexities and, as I discovered them, they were key to how I could play him.

PB: You spent a lot of time in front of the green screen on this one, right?

DH: A lot of green screen. I remember at one point, Sngmoo, the director, said, “I want you to shoot up into the sky” and I said, “Well, what am I shooting?” and he said “Light 26,” which was a large stage light and I said, “O.K. but what is it?” and he said “It’s a Ninja.” I said, “Oh, of course, of course and how many Ninjas are around?” and he said, “Hundreds, appearing from every angle!” And I could only imagine how a western character in turn of the century America would feel if he came across something like that; most likely he’d be absolutely terrified. My villain, The Colonel is horrified by the sight of these supreme fighting machines.

PB: Now, given your family history, you’ve obviously spent the majority of your time on this planet on film sets. I’m curious to know, what are your passions outside of the family business?

DH: Oh….Wow….I don’t have many other great passions apart from film and the family business. I love to go up to my sisters ranch, about 3 1/2 hours out of town and spend time there riding. I love horseback riding and I suppose my best investments really have been in travel, which really has given me the opportunity to explore the world, and what better way to see the world than with a traveling circus on a film set? One of my favorite memories as a child was being in the Atlas Mountains of Morocco when my father was shooting a film called THE MAN WHO WOULD BE KING and hanging out with “the Blue People,” this great tribe. So, I suppose travel would be my favorite past time.

PB: You began in the business behind the camera. Do you have any plans to return to the director’s chair anytime soon?

DH: I do! I’m itching to get back in the saddle. I’ve got this project that I’ve been developing for the last fifteen years called DAY OF THE DEAD. It’s a sordid tale, set south of the border in Tijuana and it’s about this collection of rather seedy and colorful characters.

PB: I’m guessing your father passed on some words of advice to you at some point in your lives together. Is there any particular nugget of wisdom that you return to either professionally or personally, from time to time, that fortifies you and keeps you going?

DH: Well, when I was, not even a teenager, I think I was about ten or eleven years old, I had a Super 8 camera. I was very happy with it, and I was filming practically everything, moving the camera around left to right and my father said, “Stop it, stop it right now!” and I said, “O.K.” and he said, “When you look left to right and right to left, what do you do?” and I said, “I don’t know Dad, I give up” and he said, “You blink! You blink, it’s a cut! Be sure what it is that you’re trying to tell and be economic in the way that you tell it and have clarity of thought and stop all that nonsense in between” and that was a very good lesson for me not only as a filmmaker but also as an actor.

PB: What are you planning on doing with the rest of your year? You’re going to Korea for the premiere of THE WARRIOR’S WAY next week, is that right?

DH: Well, no, unfortunately. I talk about how much I love to travel, but I actually can’t go to Korea next week. I’m starting a film with my friend Bernard Rose. It’s the third of a trilogy we’ve done of modern day adaptations of Tolstoy’s short stories and so I’ll be doing that over the Christmas holidays.

PB: Sounds great! It’s been a real pleasure speaking with you today Danny, thank you for your time.

PB: Enjoy the rest of your year!

DH: And you as well sir, thank you.