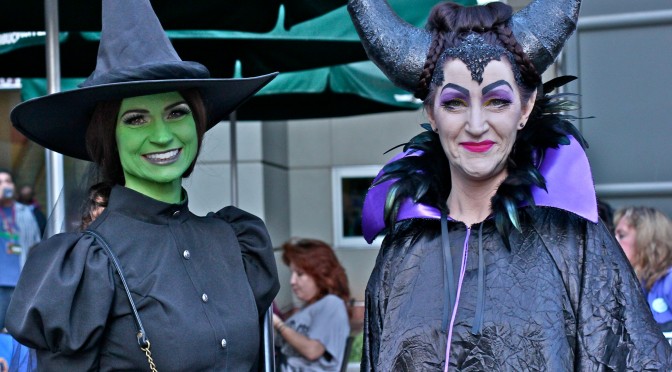 The Phoenix Comicon is the annual preeminent event in Arizona for geeks, freaks and nerds, (we’ll let you decide where you personally fall within those titles), and this year’s event was one of the biggest and best yet!

With a final attendance tally coming in just shy of 80,000, PCC is quickly shaping up to be one of the largest Comicons in the United States, make no mistake, they’ve come a LONG way baby! Congrats to all those involved for their continued and growing success!

A few of our favorite highlights from this year’s festival include:

* The amazing panels, featuring some of the biggest names in the biz; Stan Lee, Bruce Campbell, Nathan Fillion, John Barrowman, (all hilarious and engaging in their own unique ways). Not to mention The Bat-Reunion featuring Adam West (Batman), Burt Ward (Robin) and Julie Newmar (Catwoman), it was an amazing treat to hear and see them all sitting together again!

* Cosplay is one of the most important aspects of any Con and this year’s did not disappoint. The trends are always interesting to witness. The most popular cosplay characters for the girls this year included Poison Ivy, Calisi (Game of Thrones), Anna/ Elsa (Disney’s Frozen) and Maleficent (from both Sleeping Beauty and the 2014 film of the same name). For the guys it looked like Spiderman was still a very popular choice, (a tough costume choice in 110 degree heat, we have to admire their commitment!), Dr. Who, (yet another challenging choice given the temps!) and, of course, Superman! The usual suspects included a handful of Slave Leias, Catwomen, Jokers and Captain Jack Sparrows, (and why not? We love these costumes and characters as well and it wouldn’t be a real Comicon without you guys, never stop!)

We’ve barley recovered from this year’s event but we’re already looking forward to May 28-31st 2015!

Live Long and Prosper Phoenix Comicon and thank you for another great year!

Now enjoy our photo gallery from the 2014 Phoenix Comicon! Wasn’t THAT a party?!

The Vocal Ranges of the Greatest Singers. From Mariah Carey’s ear-piercing whistle to Barry White’s deep bassy growl, compare the vocal ranges of today’s top artists with the greatest of all time. (via ConcertHotels.com).

I recently had the pleasure of catching up with actress, author and survivor Mackenzie Philips at the 2012 Sedona International Film Festival. She seems to be doing quite well these days and I really enjoyed speaking with her about her new indie film, Peach Plum Pear, as well as her life as an infamous headline grabbing celebrity.

Before we get to the interview, here’s the trailer for her new flick!

Pop Bitez: So, tell me a little bit about your new film Peach Plum Pear.

Mackenzie Phillips: Peach Plum Pear was a complete passion project for all of us. It was written by a young girl ( Samantha Genovese), directed by a first time director (Alana Morshead) , starring Bobby Lyons, who is an wonderful, older character actor, he plays my husband, a lovely young actor named Tyler Blackburn, he’s on Pretty Little Liars, Alex Beh, Alanna Masterson, it’s a great cast. The film was made for less than 100,000 dollars, everything was donated, Red Cam, lights, I mean, we all just did it for passion, we didn’t have dressing rooms, we were changing in people’s bathrooms, borrowing people’s houses for sets, we got gifted with such an incredible soundtrack, it’s very, very good. It’s just this sweet story about these two young guys from L.A. who are on a sort of undisclosed, vague, slightly, possibly sinister mission cross country, one boy is very quiet and extremely handsome and the other one is kind of wild and they decide they want to get off the road and they end up in my bar in Nebraska, late at night, and their car gets stolen and I end up taking them into my house with my curmudgeonly husband, and we’ve never been able to have children and these two boys just become part of the family, and they meet this amazing little elf woman, not a real elf woman but just a girl who’s very waif-like and it’s a sweet, sweet, strong film.

PB: Judging from your enthusiasm it sounds like you had a great time, is that right?

MP: We had so much fun, I mean, we had such a good time, there was, like, one trailer that had all the wardrobe in it, the make up person in it, the production office in it an catering was being stored in it at night when we weren’t shooting and we would all just pile in there like a bunch of kitten cats on the couch, there was like one couch and we were all in there leaning on each other going, “I’m tired, it’s four a.m.!” It was so much fun, I really enjoyed doing it and I think it shows for all of us.

PB: And tell me a little bit about your character, Sharon.

MP: Well, she’s really interesting, she’s hard but sweet and so I had them…you know, women of a certain age do not look good in really dark lipstick and so I had them put on heavier make up and really tight clothes to make her look…..

MP: …Like she’s trying really hard, I mean, fake eyelashes… but not over the top, not like Tammy Faye, it was fun to create this person, I really did enjoy it.

PB: What’s the next creative chapter?

MP: (laughs) Well, that remains to be seen, I’m not in a position where I can say, “oh, I want to do this, hello Mr. Ron Howard, I want to be in your movie…”, that’s just not where I am right now but that doesn’t mean those opportunities won’t come my way.

PB: Have you thought about a one woman show, maybe?

MP: I actually have, I think it would be a great idea. I would love to see “High On Arrival” made into a Showtime movie or an HBO movie but I think people’s perception of the material is that it’s very cringe inducing, although, if they had read the book they’d understand, there are no “details” in the book, anyone who would want to read them or write them is an insane person. So, we’ll see what happens, I’ve definitely thought of a one woman show with my life story.

PB: What was your experience like on the VH-1 reality series Celebrity Rehab, I can’t imagine that was easy.

MP: It’s very weird, I had been drug free for 9 months when I went into Celebrity Rehab but I went in as sort of a favor for Dr. Drew [Pinsky], because I’d had ten years clean previously…, you know, these things happen,…. and so I went in and it was very odd because, when you get there you have all these people detoxing from pills and heroine and… you know, I’m 9 months clean and I’m like, “C’mon, let’s go! When are we going to do something!”, and I’m sitting on the couch making friends with the staff. You wake up in the morning and as soon as you walk out of your room you are miked and there’s a camera on you almost all of the time and then when you go in you room at the end of the day, until you turn your light off there’s a camera on you and you’re miked and then as soon as you turn your bedroom light off the night-vision camera comes on and,… I like to spend a lot of time on my own, I’m a big reader, very techie, very social media oriented person and I live with four dogs, two cats and a 25 year old son in a big house so, you know, I’m around a lot of creatures that don’t talk to me and it was very odd being followed around for 21 days but, because I’m sort of “teacher’s pet” and friends with Drew,.. well, not “friends”, they have a great deal of respect for me and I have a great deal of respect for them,.. I was still finishing writing the book and I was allowed to meet with my co-writer, I was allowed to go off the unit to my house a couple times with one of the staff members with me, because I had a very sick dog, so, my experience with it was slightly different than the other people but still, it was very, very hard doing that reality show.

PB: I can’t imagine. I mean, I understand the “entertainment value” for lack of a better way of describing it and I understand the possible therapeutic value for some of the viewers out there…..

PB: Now you’ve been pretty outspoken and up front about your addictions, which I think is incredibly brave….

PB: Has getting it all “out there” been a cathartic experience for you?

MP: Well, I don’t really like to use the word “catharsis” but I do think that it’s been something that, had I not done it in such an honest and raw and real way, I probably would not be well right now, or as well as I am. I think that after putting out so many sanitized versions of my life and my reality had I not told the truth in an actual book, that stands the test of time, that is actually a hard copy of something, it would have haunted me till the day I die and I probably would not have been able to maintain wellness still living that lie.

PB: And how are relations with your family at this point?

MP: I don’t have any contact with my sisters or one of my brothers. My other brother, Jeffery, and I share the same mother and she’s slowly down and living in assisted living so we need to have contact in order to take care of our mom but, other than that, we don’t just call each other and say, “Yo, what’s up?”, I mean, I would give anything to have relationships with these people but I understand why they are angry, I really do, and I’m very, very sorry but I can’t help that.

PB: You’ve actually been involved with several different charitable causes lately, lending your name and time, is that right?

MP: Well, I’m a huge supporter of LBGT rights and gay marriage equality, sorry, “MARRIAGE equality”, it should be called “marriage equality”, why be specific? It should be marriage equality for everybody, and I’m an advocate for pet rescue and I rescue pets and work at pet rescues to help animals get adopted out and I’m part of the campaign “Adopt Don’t Shop”. I like animals probably more than I like most people, (laughs) and I’m just a big advocate for giving a voice to the voiceless, which are animals, children, abuse survivors and people who don’t feel like they have a voice.