There are several profound mysteries in our vast but, comparatively tiny, universe; Where did we come from? How did the Great Pyramids come to exist? Why has the indie film, Tommy Wiseau’s The Room, been packing movie theaters, around the world, every Friday and Saturday night for the last seven years?

The evolution of a “cult movie” is as mysterious as it is unpredictable, you can’t plan for it, it just happens and, if you’re the filmmaker embarrassed and blamed for the movie’s crash and burn, it is the perfect happy accident. One day the would-be filmmaker is licking wounds from his disastrous premiere and then, without warning or explanation, the clouds part, the angels begin to sing and a double rainbow sweeps across the previously darkened skies, and before you can say, WTF(?), the ugliest of ducklings becomes a gimpy and glorious swan or, as is the case with a movie that reaches cult status, an unstoppable cash cow.

The critics hated The Rocky Horror Picture Show and, in it’s initial release, the box office flop was decried as a mitigated bomb. How could they know that following their miserable opening weekend in 1975, a quiet buzz and groundswell was building that would, eventually, catapult their disaster into “the longest-running limited theatrical release in film history”? If you’d have told the studio heads, the morning after Rocky Horror’s dreadful debut, their strange rock musical about a “Sweet Transvestite from Transexual Transylvania” would be playing on screens around the world, every weekend, for the next 35 years, they wouldn’t have laughed, they’d have shot you dead where you were standing.

Every decade seems to deliver at least one spectacularly odd film that strikes a chord and rises to the level of “cult classic” status. The 50s had Ed Wood’s Plan 9 From Outer Space, the 60s gave us the zombie classic, Night Of The Living Dead, the 70s cult crown was owned by Rocky Horror.. (though, some may argue, John Water’s Pink Flamingos was a close runner-up to the title), the 80s belong to Troll 2, and the best worst movie of the 90s, in my useless opinion, has got to be Showgirls. Which brings us to The Room , which is without question or competition, the cult classic champion in the first decade of our new millennium.

As I mentioned in last weeks column, I attended a screening of The Room this past weekend presented by the “Midnight Movie Mamacita” of Arizona, Andrea Beesley-Brown. On both Friday and Saturday night the theatre was packed and, believe it or not, I actually spoke with a young couple at the event who claimed they had flown in from Canada to attend this particular screening. What made this screening different from all the others taking place around the globe last weekend was the fact that director/ screenwriter/ actor Tommy Wiseau was in attendance, ever the proud papa of his over-achieving and demented child.

Now, I haven’t got the time or inclination today to give you a full synopsis of this flick but what I will do is give you a moment now to check out the trailer, enjoy, we’ll continue when you’ve recovered.

I must confess, when I first considered talking with Tommy I was a bit intimidated, not in the same way I would talking with Jeff Bridges mind you, but merely by the fact that he’s a bit enigmatic and…unusual.

What is known about Tommy Wiseau’s personal history prior to his “arrival” with THE ROOM is minuscule and dubious. He has been secretive about exactly how he obtained the funding for his film, (but he did tell Entertainment Weekly that he made some of the money by importing leather jackets from Korea.) He claims he eventually amassed $6 million, all of which was spent on production and marketing. As for his country of origin, again, he’s never really offered a clear answer. Tommy claims to have lived in France “a long time ago”, grew up in New Orleans and went back and forth between the United States and Europe throughout his life. He also lived, for a time, in San Francisco, where he was employed at a hospital, (though some have speculated he may have just been a guest.) Of course, none of this would explain his broken Eastern European accent. If I were a betting man, I’d have to say my best guess would be Bosnia. If, however, you make the mistake of asking Tommy where he’s from, you’ll be met with an exasperated sigh, a roll of the eyes and the proud proclamation, “I’m an American!”, and, let there be no doubt, he truly is. In fact, the story of Tommy Wiseau is in and of itself the most literal definition of the American Dream I’ve come across in quite some time. Of course, Whether any of that story is actually true will forever be open to speculation and debate.

The truth is, I enjoyed my conversation with Wiseau much more than I originally expected I would. Though he never once removed his rock-star sunglasses, he was funny, gracious and very accommodating. At one point, in an attempt to acknowledge he isn’t completely unaware that some may be laughing AT him more often than WITH, Tommy offered, “Whatever you spin in your article, you can spin negative, you can spin positive, I still say we end up O.K., because, my point is, I want people to have groovy time.” Make no mistake, the people do. At the screening I attended, I saw an audience that had studied every beat and nuance of Wiseau’s script and, much like the ROCKY HORROR screenings, had developed their own dialoge to accompany the film. When, “Great Scott” is exclaimed in RHPS, rolls of toilet paper sail through the theater, during THE ROOM, whenever the camera catches the odd artwork featuring photographs of spoons, a hail storm of plastic spoons rains down on the auditorium. THE ROOM, as is the case with the best cult films, is not a movie as much as it is an event. Not only, as Tommy said, is it a “groovy time”, it’s also a major pop culture phenomenon as witnessed by all of the people lined up to buy the film’s poster, the Tommy Wiseau bobble heads and the t-shirts featuring a football and the phrase “The Room Generation”.

While preparing for my interview with Tommy Wiseau I decided I wasn’t really all that interested in asking the many questions he’s already answered a thousand times over, anymore, I’m sure, than he was in answering them again and this is what brought me to the thought, “what would James Lipton do?” Fans of Lipton’s Bravo series, INSIDE THE ACTORS STUDIO, are familiar with the “questionnaire created by the great Bernard Pivot”, where the same ten questions have been asked of legends as varied as Al Pacino, Barbara Streisand, Dustin Hoffman and Meryl Streep. It occurred to me that, since it’s highly unlikely Tommy will ever find himself on the receiving end of Lipton’s blue cards, this would be a perfect and absurd opportunity that I simply could not resist. 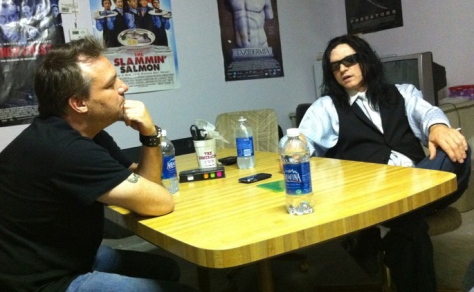 TW: F word (oddly enough, this didn’t stop him from using it, multiple times, in his movie).

PB: What turns you on creatively, spiritually?

TW: My own spirit and the spirit for party.

PB: What turns you off?

TW: Negative-ness. (this would explain why The Room has such a happy “Hollywood ending”….or not).

PB: What sound do you love?

TW:… Umm, that’s good one, love sound … or, and… subtle yelling sound, but smooth. (your guess is as good as mine)

PB: And what sound do you hate?

PB: What profession, other than your own, would you like to attempt?

TW: I’m universal so I have several professions, I do many things, but just one..? I could be Governor, why not?

PB: What profession would you not like to attempt?

TW: I don’t want to be business man but I have to…that’s my answer.

PB: And, finally, if heaven exists, what would you like to hear God say as you enter the pearly gates?