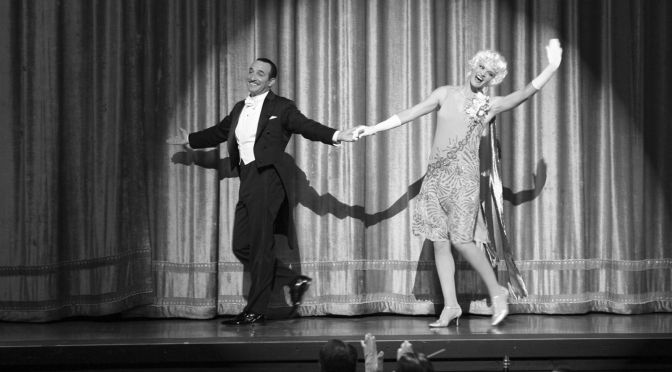 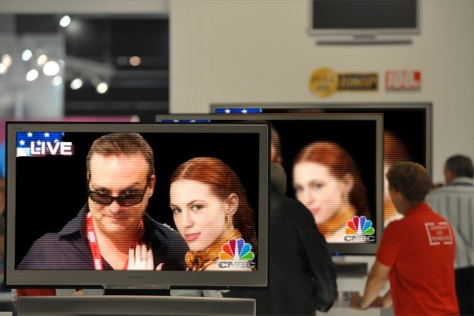 Welcome to the weekend Popsters! It’s time for another Pop Blitz so, without further yada, yada, yada, let’s get this party started!

• Le Voyage Dans La Lune (a Trip to the Moon)

If you’ve seen Martin Scorsese’s latest masterpiece Hugo, nominated a few weeks ago for 11 Academy Awards, you are now well acquainted with the visionary work of George Méliès, the groundbreaking director and magician who took the art form of filmmaking to a whole new level in 1902, only a few years after the Lumière brothers in Paris introduced their innovative camera and short films to the public during the winter of 1895. Between 1896 and 1913 Méliès directed 531 films, ranging in length from one to forty minutes and there simply isn’t a filmmaker alive today who doesn’t owe at least a small part of their success to the great “Cinemagician”.

These days Méliès’ films are experiencing a bit of a renaissance both with the success of Scorsese’s celebrated film and also the original novel, The Invention of Hugo Cabret, on which the movie is based.

In what is bound to be regarded as one of the coolest releases of 2012, The French electronic duo Air have a new album, out this Tuesday 2/7, that takes its inspiration from Georges Méliès classic silent film Le Voyage Dans La Lune (A Trip To The Moon). A fully restored version of the film featuring Air’s new score is currently playing at film festivals world-wide and digital purchases of the album will include the newly restored and colorized 16-minute film for a limited time! I’ve actually heard an advanced copy of the album and I can tell you, Air fans won’t be disappointed. That being said, I personally can’t wait to hear the band’s new collection of tunes accompanying Méliès’ film, which, by the way, in case you didn’t already know, was the very first science fiction film ever made. For now, you and I will simply have to settle for this short teaser.

• Close Up On: The Artist

Speaking of classic movie making and Oscar nominations, it’s no secret at this point that the indie hit, The Artist, is now the odds on favorite come awards night.

There was no bigger surprise or curiosity in 2011 than the arrival of The Artist, directed by French filmmaker Michel Hazanavicius, starring his wife, actress Bérénice Bejo and his favorite go-to leading man Jean Dujardin.

Hazanavicius, a dedicated student of film, spent countless hours at the Cinematheque Francaise in Paris, poring over films from our bygone eras. He found himself endlessly fascinated with the extensive collection of silent films the Cinematheque had available and, after watching dozens of films from the period that dated shortly before the talkie revolution, a germ of an idea was born that would eventually become the first silent film to be nominated for an Academy Award in 85 years.

Just for fun I thought I’d share with you today a few interesting facts you might not know about The Artist and the creative team behind the unlikely hit silent film. 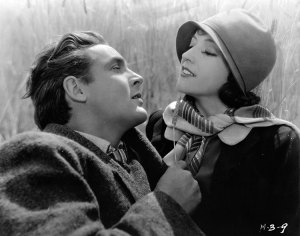 Much of the inspiration for the production design, sets, staging, lighting, etc. came principally from the silent classics Sunrise and City Girl both directed by legendary filmmaker F.W. Murnau. These were the films director Hazanavicius shared with his cast and crew in preparation for their journey back in time. 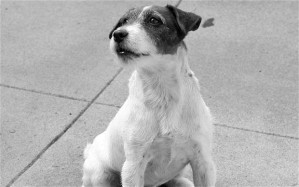 Dog lovers, (myself included), would argue the real star of The Artist is Uggie, the scene stealing Jack Russell Terrier featured in nearly every pivotal moment in the film. Born in 2002, Uggie was adopted and saved from being sent to the dog pound by Hollywood animal trainer Omar Von Muller. Muller has explained in interviews that Uggie was rejected by at least his first two owners as being too wild and was about to be sent to the dog pound before he was rescued by Muller. Recently the trainer offered, “He was a crazy, very energetic puppy, and who knows what would have happened to him if he had gone to the dog pound, but he was very smart and very willing to work. One of the most important things is that he was not afraid of things. That is what makes or breaks a dog in the movies, whether they are afraid of lights, and noises and being on sets. He gets rewards, like sausages, to encourage him to perform, but that is only a part of it. He works hard.” Prior to The Artist, Uggie’s most prominent role was his featured work in 2010’s Water for Elephants. At the 2011 Cannes Film Festival Uggie was awarded the Palm Dog Award for his performance as “Jack” in The Artist, it was the eleventh year in which the award was handed out, and is awarded to the best canine performance. While there is no Academy Award for “Best Canine”, Uggie is the odds on favorite to win Dog News Daily’s Golden Collar Award on February 13th, for which he has been nominated for his work in both The Artist and Water for Elephants. His competition for the Golden Collar includes, Cosmo from Beginners, Denver from 50/50, Hummer from Young Adult and Maximilian from Hugo. In a recent interview with Life & Style Magazine, Uggie’s trainer/ owner Omar Von Muller announced the 10 year old pooch is going into semi-retirement, “He may do a couple of little things here and there because he enjoys them, but I don’t want to put him through long hours anymore. He’s getting tired.” Still, before he begins his well deserved, lazier days at his home in North Hollywood, he’s got the Oscar telecast coming at the end of this month. As you might rightfully expect, Uggie has been “in rehearsal” recently with Billy Crystal, this year’s host for the 2011 Academy Awards. 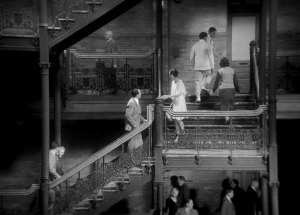 No doubt fans of this instant classic will be seeking out some of the retro locations featured in the film the next time they’re in Hollywood, (I know I will). One of the spots high on the list will most likely be the Bradbury Building at 304 N. Broadway in Los Angeles, (pictured above), featured previously in the films Chinatown and, more recently, 500 Days of Summer but, I predict, from this point forward, will be remembered for one of my favorite scenes in The Artist, where Peppy Miller, on her way up, is reunited with George Valentin, on his way down, (both figuratively and literally). Other notable locales include, Peppy’s house, which is actually silent screen star Mary Pickford’s old home at 56 Fremont place in Los Angeles and George Valentin’s chateau-style home which is only a few doors down the street at 104, both in L.A.’s historic Hancock Park neighborhood. 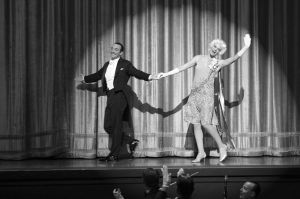 In an age of over bloated budgets and star salaries, it’s almost comforting to know this favorite to win the Oscar for Best Picture stars two actors largely unknown here in the states and was shot in 35 days with a budget under 20 million. In many ways this tribute to the Hollywood of yesterday is a classy, tasteful and nicely manicured middle finger to the Hollywood of today, and you gotta love that, Lord knows I do!

• A Bathing Suit To Leave Them Speechless 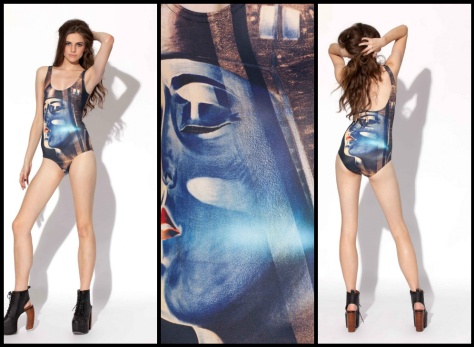 Since we’re talking a lot about silent films I think this new bathing suit from Black Milk Clothing is a perfect fit for today’s “Blitz”. Inspired by the classic silent film Metropolis, this poptastic one piece is sure to leave them speechless on the beaches! This has got to be one of the coolest companies for women’s pop clothing on the web. 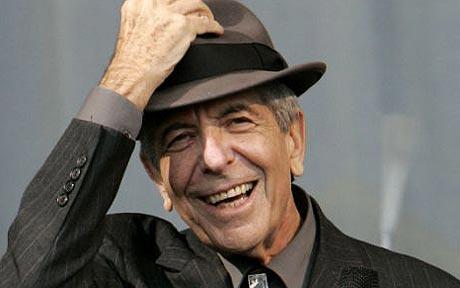 In celebration of Leonard Cohen’s Old Ideas, the legendary songwriter’s latest collection of tunes released earlier this week, Columbia Records is offering a Vimeo series titled “Old Friends with New Ideas“, which puts together videos from a variety of artists covering some of Cohen’s greatest hits. It’s not exactly a new or original idea but, still, I’m always down for a good cover of a Cohen classic. Videos currently available include Greg Dulli with “Paper Thin Motel” and Cults with their awesome cover of “Everybody Knows“, which I’m including for you here today. Videos and covers still to come include Bradford Cox and the New Pornographers’ A.C. Newman. 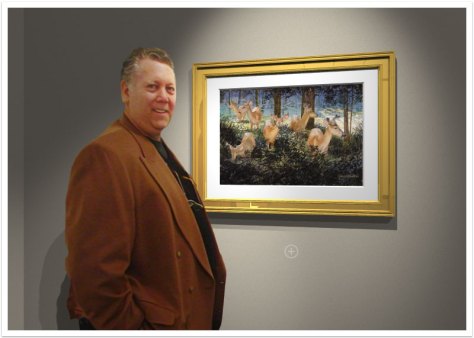 There is no one in my family more gifted or cooler than my cousin, world renowned water color artist David Rankin. I’ve actually featured David’s work on Pop Bitez before as I am one of his biggest fans. I’ve been looking up to my cuz and his talent since I was about five years old, which, in case ya didn’t know, was more than a few years ago.

David recently put together this awesome slide show featuring some of his best work and the second I saw it I knew I had to share with my Popsters! I know you all have great taste and will really enjoy this one!

“My God, It Looks Like That Dress Was Painted On….”

Ummm, Actually, IT WAS! Is this our future? Pretty crazy stuff! Check it out!

•The Joy of Books

I’m so glad to be living in the age of the world wide web and sites like Youtube and Vimeo, the endless supply of cool and unique videos that entertain, amuse and educate is really something I’m deeply grateful to have at my fingertips, particularly when it comes to art and the kind of stuff we really would never have a chance to see if not for the internet.

This is another one of those gems, enjoy!

That last video, of course, put me in mind of this great animated short which is actually in competition at this year’s Academy Awards. If you haven’t seen it yet it’s definitely worth a few minutes of your time, it’s very sweet and more than a little brilliant. Share it with your kids!

Alright Popsters, that’s all the news that’s fit to POP this week! Have a great weekend, be nice to each other and I’ll see you back here soon I hope! Cheers!- Scott