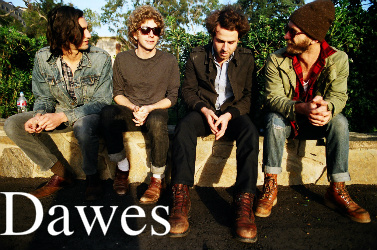 Weeknights in Downtown Phoenix usually aren’t all that eventful or note worthy but, this past Monday, I actually witnessed one of the best live shows I’ve seen this year.

The L.A. based folk/ rock band Dawes are currently on the road, sharing the bill with Portland’s current favorite sons Blitzen Trapper and, when it comes to teaming bands up for a tour, it’s hard to imagine a better combo.

Dawes is part of the “Laurel Canyon sound”, which, in it’s long history as a Southern California music mecca, includes such legendary artists as Tom Petty, Jackson Browne and The Eagles. The obvious influence of these rock and twang giants was definitely evident in Dawes’ show Monday night but it’s the group’s new take on the old sound that really had the crowd’s full attention for the entirety of their 45 minute set. The band featured songs from their impressive debut album North Hills as well as their most recent release, the outstanding, Nothing is Wrong. Concert highlights included the bluegrass influenced, “When My Time Comes“, the moody rocker “If I Wanted Someone” and the song I’m convinced Tom Petty wishes he’d written, “Time Spent in Los Angeles“. The vocals and guitar work from frontman Taylor Goldsmith, combined with the solid musicianship of Kevin Hays, Wylie Gelber, Tay Strathairn and Griffin Goldsmith was nothing short of exceptional and left the room, nearly filled to capacity, clamoring for more. Given the opportunity, I would not hesitate in seeing this band again, and again and again….

Taking full advantage of the mood Dawes had established earlier in the evening, the experimental indie folk/ rock act Blitzen Trapper took to the stage with the swagger and confidence of a band that’s been slugging it out on the indie scene for awhile now. To be exact BT have been building their loyal and dedicated following for over a decade and that wealth of experience was on full display at Monday night’s show. Opening with the gentle gem “Love it When You Walk Away“, at first blush, seemed like a surprisingly laid back choice to start their show but, as the night progressed, it became more than clear, there is a method to the seeming madness of the Blitzen Trapper setlist. They start quiet and slow and then, at about the midway point, all hell begins to break lose until, by the final encore, it’s hard to believe the group you’re watching tear up the stage in a wicked exhibition of full on rock and roll is the same band you saw at the beginning of the set, playing relatively quiet and contemplative folk rock. It’s as if you went to a Bob Dylan concert and then, at some point when no one was looking, Jimmy Page and Robert Plant highjacked the show.

The highlights of Blitzen Trapper’s set list- of which there were many- included the harmonica driven foot stomper “Your Cryin’ Eyes“, from the band’s latest album American Goldwing, the Allman Brother’s influenced “Big Black Bird“, the popular audience favorite “Furr“, (from the album of the same name) and, perhaps the biggest crowd pleaser of the night, “Black River Killer“, a dark and groovy tale about a homicidal transient told in a traditional folk style, with the exception of a recurring synth motif straight out of a 70’s cop show soundtrack. When the band took the stage for their final encore and began to play the opening chords of a classic tune from the Led Zeppelin catalog, my first thought was, “No way! they’re going to cover Zeppelin?!”, my second thought was, “Hell, yeah! They’re covering Zeppelin!”, and why not? If any indie band currently on the road could pull it off it’s these guys and they proved more than up to the ballsy task. My fist was in the air while my jaw was on the floor.

All in all, it was a helluva a show from Dawes and Blitzen Trapper and way too much rock and roll fun for a Monday night!

On a side note; if you’re ever in Phoenix, AZ you must check out our newest space, The Crescent Ballroom! The vibe is awesome and whoever they’ve hired to run their sound is a genius when it comes to mixing, especially considering the intimacy of the room. Big kudos to the folks at Crescent Ballroom for bringing a great new venue to the downtown scene in Phoenix, AZ. I hope to be back for many, many more shows!

Dawes and Blitzen Trapper will be continuing their U.S. tour through the end of November, if they’re headed your way you may want to get on the tickets now, dates are selling out fast! For a full list of the upcoming shows you can get them all at Dawes’ or Blitzen Trapper’s websites.

The Way You Laugh

When You Call My Name

If I Wanted Someone

Peace in the Valley

A Little Bit of Everything

When My Time Comes

Love the Way You Walk Away

Takin’ it Easy Too Long

Sleepytime in the Western World