Happy Friday Popsters! I’m still in recovery from my fast and furious weekend in L.A. last week. I gotta tell ya, I crammed A LOT into my brief visit to Cali and the only minutes wasted were the few hours I spent sleeping. It was really great to catch up with my friends Lou, Seana, Mark and Jonathan and I’m also very thankful I had a chance to meet, (albeit too briefly), Deborah, Jason, Gary and John. Thanks to all for making my trip a very satisfying and memorable experience!

The new Foo Fighters video for Walk debuted online recently and it’s yet another great addition to their growing collection of hilarious and inspired music shorts. As you will quickly discover, the video is a bit of a tribute to the cult favorite flick Falling Down. The movie starred Michael Douglas as a recently unemployed man who, on a sweltering day in Los Angeles, reaches his breaking point and takes up arms against the various flaws he sees in society. I have to admit, this flick crossed my mind once or twice while I was sitting in the mind numbing grid lock of the L.A. freeway last Friday. Odds are I wasn’t the only one.

For more Foo-tastic fun, check out the winners of the band’s “This Video Sucks Contest” on the Foo Fighters video page, here’s one of my favs of the bunch , Miss the Misery (featuring Fee Waybill on background vocals) Directed by- Pete Levin, ( I love the artistry of this one, it almost feels like a modern update of A-Ha’s Take on Me…..and I’m really digging the red head).

AMC, the network responsible for an impressive list of award winning, original programs that includes Mad Men, The Walking Dead, Breaking Bad and The Killing are currently working with Kevin Smith on a reality project that will be set in the geeky and poptastic world of comic books.

Smith, director of the cult classics, Clerks and Chasing Amy and the not so classic Dogma, Jersey Girl and Cop out, is well known as a major comic book fan and writer and will serve as executive producer on the new project. The series will revolve around the two guys who run Smith’s New Jersey comic book store, Jay and Silent Bob’s Secret Stash.

AMC has also announced series orders for two docu-series: Inside the DHS, which will follow the daily goings-on of Janet Napolitano and her employees at the Department of Homeland Security (an incredibly stupid and questionable idea if you ask me) and then there’s the more promising, Pitch, a “real life”, modern take on the network’s most successful series, Mad Men. 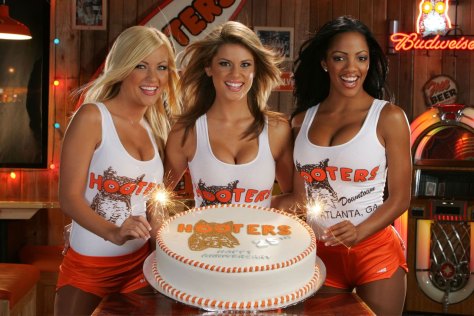 Sorry, that headline should have read “Booming”.

According to Entrepreneur Magazine, “Breastaurants” (a term used to describe restaurants that feature scantily-clad women as waitresses), have been doing very healthy business in this troubled economy.

Hooters, the most popular of the breastaurants, now nets about $1 billion annually, but there are several other “up and comers”, all offering their own spin on push-up tops and tight bottoms. The Tilted Kilt Pub & Eatery’s CEO Ron Lynch explains his chain’s concept to Entrepreneur, “We sell on sex appeal, but we are sexy classy, sexy smart or sexy cute. Not sexy stupid or sexy trashy.” Randy DeWitt of the Twin Peaks chain feels similarly, explaining that Twin Peaks has much better quality food and more “finished” uniforms for the girls.

Business Insider has a tasty slideshow of the many variations of the “Boobs and Brew” concept, you can see it here

• Once: The Musical, sets it’s sights on Off-Broadway 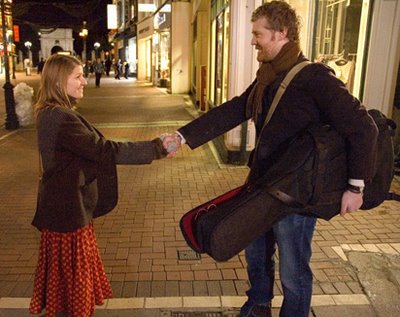 The new musical Once, based on the 2006 independent film about an Irish busker and a Czech musician who form a tentative collaboration and romance in Dublin, will get its premiere at Off-Broadway’s New York Theatre Workshop rather than Broadway. A very wise choice given the intimate nature of the story.

The New York Times first reported the news of the Off-Broadway bow. Celebrated Irish playwright Enda Walsh (Penelope, Walworth Farce and New Electric Ballroom) wrote the libretto, and songs have been penned by the film’s actor-musicians Glen Hansard and Marketa Irglova. The songwriters co-wrote the majority of the music featured in the film, including the Oscar-winning Best Original Song, “Falling Slowly,” which, of course, will be included in the stage musical.

The indie Irish film was made for just under $150,000, was shot in 17 days, and went on to gross over 10 million.Following the success of the film, the songwriters Hansard and Irglová formed the band The Swell Season and have toured the world extensively for the last five years.

The Fall dates for the premiere of Once will be announced shortly.

If you haven’t seen this sweet little film yet, I highly recommend you add it to the top of your queue. The subtle performances are inspiring and the music is some of the best I’ve heard in a film in a very long time.

You’ve heard it on American Idol and The Voice and probably saw your local high school’s show choir perform it recently but, you simply can’t beat the original. Now enjoy the Oscar winning “Falling Slowly” from one of my all time favorite flicks, Once (skip the commercial)

While in L.A. last weekend I had a chance to catch the excellent new Tim Burton Exhibit at the Los Angeles County Museum of Art. Burton’s show began in NYC at MOMA and has since gone on to break attendance records in both Melbourne, Australia and Toronto, Canada before landing in L.A.

The collection is impressively extensive, the exhibit begins with Burton’s early notebook doodles from his high school days and goes all the way up to costumes and set pieces from his most popular films, including but not limited to; Beetlejuice, Edward Scissorhands, Batman, Nightmare Before Christmas, Sweeney Todd and Alice in Wonderland.

Personally, I’ve always found Tim Burton to be one of the weakest story-tellers Hollywood has to offer. That being said, when it comes to sheer vision and design, with the possible exception of Terry Gilliam (another challenged story-teller), I’ve always considered Burton to be nearly peer-less.

Judging from the massive lines I saw at the museum last Sunday, this show is destined to set records for LACMA. Snob that I am, I’m heartened to see the crowds in front of the museum, (as opposed to the neighborhood multi-plex), and Burton’s work is simply much more impressive in this venue than on the big screen.

The West Coast run is scheduled through 10/31 of this year, for more info check out the LACMA website.

• Q & A with Go the F— to Sleep Author Adam Mansbach

Time Magazine has a short but fun interview with Adam Mansbach, author of the runaway hit Go the F— to Sleep. The book was inspired by a random Facebook posting Mansbach had made one night when his daughter was repeatedly interrupting him as he worked on his latest novel. The result may be the most brilliantly inappropriate, honest and hilarious book ever written by a parent and, in all likelihood, will go a long way in paying for the education of the author’s darling little brat and, no doubt, a few of her siblings as well. You can read the Q & A here.

The Tony Awards, named for Antoinette Perry, an actress, director, producer, and dynamic leader of the American Theatre Wing, airs this Sunday night on CBS (check your local listings for times).

Playbill.com recently posted a few montages of this years nominees and the videos are a great primer to prepare you for Broadway’s biggest night, check em out!

Best Revival of a Musical

Best Revival of a Play

A New PopCast is Now Available for Your Listening Pleasure!

When you have some time this weekend you’ll really want to check out the new Pop Bitez PopCast. I’m featuring a lot of new music this week, including the Arctic Monkeys, The Features and Frank Turner. There might even be a very inappropriate show tune in the mix this week in honor of the Tony Awards. As always, the PopCast is also available on iTunes, so subscribe today!

Alright Popsters, that’s all the news that’s fit to POP for this week! Have a great weekend and I’ll see you next time! Cheers- Scott