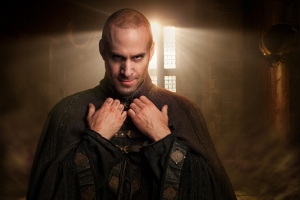 Recently I had a chance to speak with CAMELOT’s director and creator Chris Chibnall (TORCHWOOD), Joseph Fiennes (SHAKESPEARE IN LOVE, STEALING BEAUTY, FLASHFORWARD) and relative newcomer Tamsin Egerton. Fiennes stars as legendary sorcerer Merlin and Egerton will be setting hearts a flutter as the young and beautiful Guinevere.

Pop Bitez: While I understand you’re approaching the legend of King Arthur from a contemporary perspective, it looks like it must be a lot more fun to work on a period piece as opposed to the contemporary stuff. Has that been your experience?

Tamsin Egerton: Almost always. I actually love doing period pieces and purely because it takes you into a different world mentally. The clothes you have to wear are so far from our everyday clothes that it immediately helps with the character and the sets that they get to build are just so beautiful and just so new and fresh, it’s like going to a completely foreign country and experiencing a new culture that you’ve never seen before because, you know, you’re exploring different worlds as it were, especially at Camelot. I mean it’s just so magical. I mean, you know, is it myth or is it legend? No one knows if it’s real of not. I know that Chris and the art director went to India to get a lot of his materials and dress the set with some incredible artifacts he’d found out there and so seeing these sets and then… the costumes were just absolutely beautiful. And yes, so much more -so personally so much more interesting than wearing jeans and a t-shirt and walking around somebody else’s house. Yes, absolutely.

Joseph Fiennes: Yes. I kind of echo that. I think it’s a large part of how an actor works, this is on an outside, not an inward level, which ultimately can affect your inside interior world, the stimulation of what’s around you, and none more so than in a period piece. I say period with caution because this is a modern piece as much as it is set in a different time, age and myth, it’s relevant or else it wouldn’t be made and we wouldn’t be putting our energy into it. It’s relevant for us today because in some ways it throws up a mirror to all of us. But having said that, from the outside perspective it’s great to have, you know, the atmosphere and the world that’s invented for you. As an actor you really – you get stimulus and you’re effected by that whether it’s costumes or wonky funny beards or wobbly sets and castles or actually just being in the real deal, being in the Wick low Mountains in County Dublin is pretty stunning. And you really feel like you’re in – you’ve sort of been catapulted in a sort of quantum leap into the Celtic times. And that’s really good and exciting.

Pop Bitez: And I imagine, in a way, you feel the ghosts of the past in that environment.

Joseph Fiennes: Oh the GHOSTS, I thought you said goats. Ghosts, yes you do.

Pop Bitez: (laughing) Sure, because Dublin’s really known for its GOATS.

PopBitez: (cont.) So Chris period piece versus modern, again, I understand the approach to the material is contemporary, but the esthetics…?

Chris Chibnall: Yes, Yes it’s fantastic. As a writer and show runner you’re not just kind of creating a set of characters and putting them down in the modern world. You know, you’re world building and, I think particularly with this, where it is in the history it is absolutely myth, you know? There might have been an Arthur, you know, there’s various interpretations of history, but, you know, the myth that we’re telling here with Merlin and all that, it’s so open to be manipulated and created. So yes, you’re building this whole huge world of castles and sword fights and then you can have some magic and, you know, it’s fantastic, yeah and absolutely wonderful. But also then, you know, we wanted to place it within a real context. The great thing about the dark ages is there’s very little documentation available. There’s very little evidence. There’s a certain amount but some of it’s contradictory. A LOT of it’s contradictory. So, you know, it was a joy doing something in a different era. Yes, absolutely fantastic.

Pop Bitez: And Joseph you were talking a bit about the process, I’m just curious, do you think your previous Shakespeare work on stage and on film helped in your preparation for a role like Merlin?

Joseph Fiennes: I don’t know. I think all experience is in some way, shape or form filtered down to helping you in your present moment. I guess that, you know, Shakespeare might do. With Shakespeare you’re trying to work with a fairly archaic language, although in certain aspects it’s deeply modern, but you’re trying to phrase it rather like a jazz player or something it, for a modern audience, to make it scan and be understood, and I guess it’s the same not with language but with this sort of visual syntax and the world that’s nothing to do with us and yet we’re trying to make it connect for a modern audience. Really it’s all about the human condition ultimately. So that’s what you’re looking at. You’re also looking to have some fun as well because that also translates. And I think the preparation…. maybe wearing tights once in a while helps, getting up on a horse a couple of times before might help. I think on those sort of practical levels…

Joseph Fiennes: …maybe it has helped.

Pop Bitez: Well, just in looking at the brief pieces I’ve seen so far of CAMELOT, I feel like there are hints of Falstaff and even Iago in your performance, though, that might just be something I’m projecting….

Joseph Fiennes: Well great, all projections welcome in that regard! You know, there is definitely..a sort of Iago… though I wouldn’t say he’s ruled by jealously, Merlin, but he is not to be trusted, and he says one thing and means another, he’s deeply bipolar, he’s sort of part angel, part devil, and he’s other worldly as well. So, you know, all of those sorts of characters that Shakespeare writes in that regard. But maybe there’s a flavor in there. I guess it’s complexity and the complexity that we’d love to try and find out what’s the sort of mechanics behind it.

Pop Bitez: And Chris, provided there is a second season -and I’ve got my fingers crossed there will be- can we expect to meet Lancelot in the first episode of season two?

Chris Chibnall: (laughs) You’re off to spoilers and we haven’t even done season one yet! I’m still putting the music on episode ten!

Pop Bitez: (laughing) Well, he’s not in Season One so, I had to ask!

Chris Chibnall: (laughs) Yes, no, I like your style though — well done.

One thought on “Pop Chat: a Few Minutes with the Cast of Starz Network’s new series Camelot”