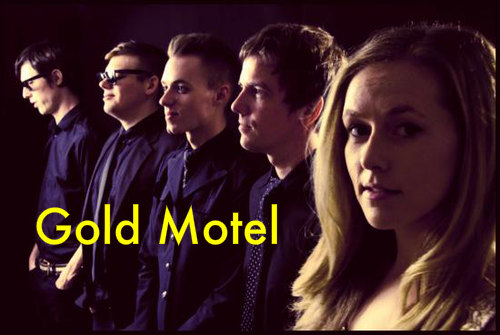 Pop Bitez: So, Gold Motel is a Chicago based band, is that right?

PB: So I have to ask, you’ve been doing a lot of touring lately, what do you miss the most about the Windy City when you’re on the road?

Greta: Well, I definitely don’t miss the weather. We’ve been on tour for the last two months, through all of January and February so we’ve been really lucky to miss all of that but I do miss the people, my friends and family.

PB: Your album SUMMER HOUSE really has a sunny California vibe, are there songs that you don’t think you could have written in Chicago?

Greta: Well, yeah, I’d been living in L.A. for a year and while I was there I wrote “Perfect In My Mind” and “Make Me Stay” and they definitely had a west coast feel to them but, the most “California” song on the album is “Safe In L.A.” which our guitar player, Eric Hehr, brought to the band and he actually didn’t write it while he was living there, I think it was just more “the vision”.

PB: I recently had one of your videos on my Facebook page, I think it was “We’re On the Run” and one of my friends commented that he thought he heard a Deborah Harry influence in your vocal style.

Greta: We actually had a contest recently, to win a copy of our new album on vinyl, we asked people to describe Gold Motel in a five word phrase and the one we picked was “Beach Blanket Bingo with Blondie”, we thought that was kind of cool and there was another we liked that was “Sunshine Warms the Brill Building” .

PB: Those are both excellent descriptions. When I first heard the album I thought, “this is a perfect album for a pool party”.

Greta: Yeah, it’s supposed to be kind of like that careless excitement of summer when you’re young.

PB: It feels like indie bands in particular are bringing a sense of fun back into mix, maybe it’s just me but it feels like popular music has been unusually dark for the last few years.

Dan: Yeah, it’s been a little weighed down and heavy, with reverb and slower tempos, it’s very serious.

PB: So who would you say are some of your biggest influences?

PB: How is it for an indie band not being supported by a major label, is it all about the internet and youtube?

Greta: Yeah, it’s definitely about social media and opening for larger artists and that kind of thing, I think the blessing is we own all of our music, we own the master and all of the the publishing and that’s the biggest blessing of doing it independently and the biggest curse is the labels have money to fund their bands on tour and to pay for their bands to be on really big tours and they have an advertising budget and that kind of thing, whereas we’re personally paying our publicist, personally paying any losses if we do any long tours….

Dan: We’re really lucky that we’ve found endorsements, we get our guitar strings for free now or we get our music on a commercial that helps to pay for that stuff, we’re lucky our manager could do that for us because if we didn’t we’d be screwed.

PB: Are you getting a lot of college radio airplay?

Greta: Yeah, we did a big college campaign and that was purposeful, there’s a company called Terrorbird who did all of that for us, essentially we’re just hiring the team we’d have at a record label, you know we have someone to do our distribution and our radio campaign and all of that. It’s really cool to see a band like Arcade Fire win a Grammy because they own their album, they’ve owned all of their albums, they’ve done licensing deals to merge but they own the rights, no one controls the songs but them, it’s a very cool thing to see an indie band get a spotlight like that.

PB: Now, Greta, a lot of indie music fans know you best from your previous band, The Hush Sound, are you guys actually still together?

Greta: We are saying we’re on indefinite hiatus, pretty much so we don’t sound like ass holes if we decide to do one show here and there, so we didn’t want to say we’ve broken up, we figured we’re too young to close the door forever but Gold Motel really has my full commitment and focus right now.

PB: I like the Hush Sound but I was actually hoping you were going to say that.

Greta: Yeah, we’re definitely in this to win it.

PB: And Dan, your previous band This Is Me Smiling, what’s the story there?

Dan: Actually myself, the drummer and the bass player are still in that band but it’s more of a recording project where we just release music, we don’t really tour or anything but it’s still on going.

PB: Are you doing any writing while you’re on the road?

Dan: Yeah, we were just in california for a couple weeks, we just hung out and wrote for a little while, we’ve got about half a record so far…

Greta: We recorded like 7 or 8 ideas and then what I put in the folder as “random jams”, you know, like all these ideas where we couldn’t really tell who started them, it was kind of like we all just got in a room together and just started playing and it was going places that were actually memorable and catchy and we’ll probably elaborate on those. It was fun, we were renting a house from the band Dawes while they’re on tour and it’s situated in the middle of the woods and we could play 24 hours a day without having any neighbors to complain.

PB: Now the two of you are the primary songwriters for the band is that right?

Dan: The last record was primarily written by Greta and I did all the recording and produced it, she came in with all of the ideas, except for Eric’s “Safe in L.A.”, it’s definitely become more of a collective thing now…

Greta: …Dan and I wrote “Stealing the Moonlight” together.

PB: And collaborative art I think is a lot more difficult than most people realize, it almost requires an accidental synergy, doesn’t it?

Greta: Well, this time in L.A. was really cool because I really only had like 4 or 5 songs written when we got there and we worked through them and there was one that I intended to be kind of a slow groove and Adam started playing it like a fast rock and roll song, it’s cool to see how something I intended to be a ballad can be changed into a this big anthem like thing, I’m exited to see how the next album comes together.

PB: Writing on the road has to be a little difficult.

Greta: It is but I’m so disciplined when I’m home so, when we’re on the road, there’s always something to work on, like at home I write everyday and even if some of it is shit I still have something on tour that I can be thinking about like a lyric or “I need one stanza for one piece on that song that’s missing and now that I’m in the van I can work on it!”

PB: And discipline for a lot of artists can sometimes be like a speed bump in the road.

Greta: Well discipline makes it sound like I don’t enjoy it which is definitely not the case, I do, I really enjoy it but it’s like “alright I’m home and I’ve got a piano, if I’m not writing today I’m just a waste of space”

Greta: …and Dan does that with recording without thinking twice, Dan’s constantly recording ideas…

Dan: … and a lot of it you throw out but it’s good to just keep the ball rolling, you know, if you sit around for too long you just start to get stagnent.

PB: So you’re not just waiting around for devine inspiration, you’re sitting down and saying “I have to try and do SOMETHING”?

Greta: I think it’s a combination of both.

Dan: Yeah, I can’t work without inspiration sometimes, it doesn’t happen that way for me.

Greta: I read this book called THE WAR OF ART and the author talks about how the difference between amateurs and professionals is that amateurs ONLY sit down when they’re inspired and that professionals sit down everyday and BECOME inspired and I think it’s a balance of that, I think definitely there are those moments of complete genius that just come out of the air around you, you know pop music is such a simple thing that you can write a verse and chorus and then stumble into this like genius idea in a matter of thirty seconds, so there is a certain amount of accidental genius but the more you sit down the more likely you are for that to actually happen.

Dan: For me the best songs always write themselves in like ten minutes, you keep it fresh by working all the time but then all of the sudden, I don’t know, just out of nowhere something will hit you.

Greta: I think I literally wrote “Who Will I Be Tonight” in something like ten minutes but then some of the other songs on the record took months and months of like slow, inspired revisions where it’s like “Oh, I have an idea, I’m going to sit down for five minutes.”

Dan: And you work on the lyrics over a long period of time, that’s what I do too.

Greta: Leonard Cohen talks about that, he said it took him more than five years to write “Hallelujah”. The way that he writes is that he’ll work on a song again and again and again until the revisions finally get the song to a point of where they’ve reached what he calls their “final inevitability”.

PB: So, what current bands are you listening to these days?

Greta: And a lot of Spoon…

Dan: …and the new Arcade Fire which is actually probably the least dark of their records, it’s definitely my favorite. Then we always go back to the old stuff, 50s stuff, like Sam Cooke.

PB: And when do you think you’ll get into the studio for the next album?

Greta: We’re planning to record this year in the late fall or early winter and then maybe release it early 2012. We’re also hoping to release another single this summer, either just one song and a video or maybe a seven inch we’re not sure yet.